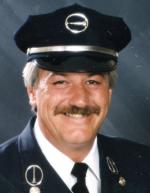 Stephen R. Brinn, 57, of Goffstown, died suddenly, August 23, 2012 , at CMC. He was born in Manchester on September 20, 1954 to Henry and Jackie (Messier) Brinn.
He received his early education locally, and was a member of the graduating class of 1973, from Manchester High School West.
In 1973 he began working for the Manchester Highway Department. In 1975 Steve was appointed to the Manchester Fire Department. He served in many capacities as a firefighter, but none so proud as his time spent at Truck One. In April of 1987 Steve was promoted to Lieutenant, and served at Engine Six, Amory St. Fire station until his retirement in 2000.
He will be remembered for his kindness towards others, and someone who always put others first. His dedication to his craft will be remembered as second to none. He will be missed.
Family members include his wife of eighteen years, Janice (Bernard) Brinn, of Goffstown, his children, Amanda Provencher, of Manchester, Megan Jones, of Bedford, Missy Page, of Goffstown, Kathie Sanders, of Goffstown, Valerie Smith, of Goffstown, Michael Kenney, of Manchester, Matthew Brinn, of Goffstown; a brother, Dennis Brinn, of Pembroke; several nieces, nephews, and cousins; his mother-in-law, Ethel Bernard; his sisters-in-laws, and their husbands.
A funeral Mass of Christian burial was celebrated on Monday, August 27, 2012 at The Parish of the Transfiguration Kelley St. Manchester.
Burial will be private and at the convenience of the family.
In lieu of flowers Memorial donations may be made to Manchester Firefighters Relief Association, 100 Merrimack St. Manchester NH, 03101.